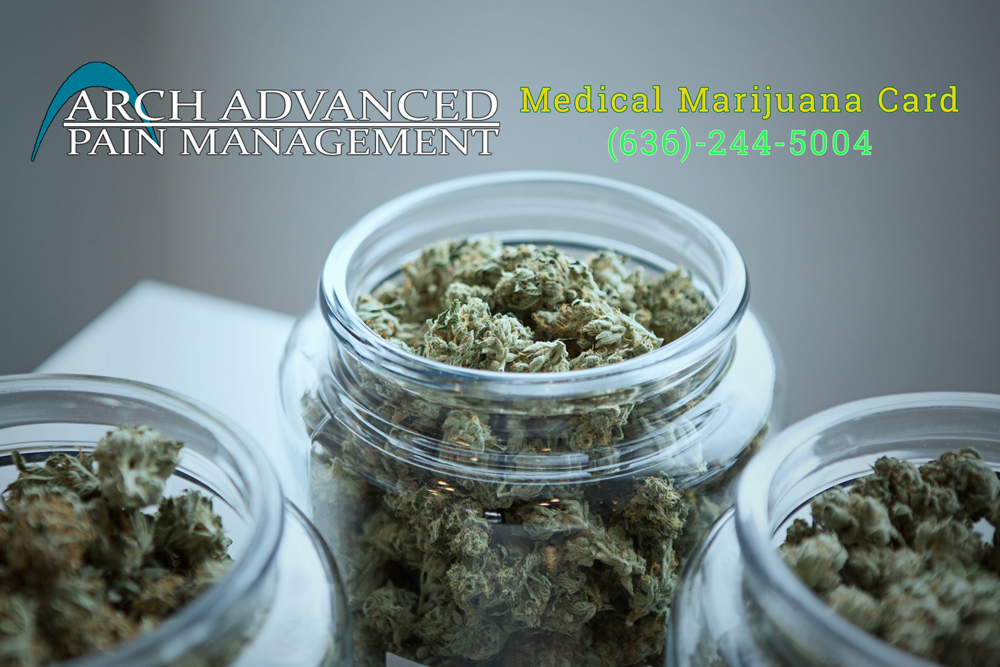 We got you covered. Located in Saint Peters, Missouri; we will guide you to greener pastures!

After you visit our office (within 30 days) you need to fill out this form for the State of Missouri DHSS (MMMP Card Missouri) below (Blue Button):
IF you need help registering on DHSS,  our staff can help for only $45 (paid in advance on Fridays).

How Much is a Medical Marijuana Card in Missouri?

Must be 25 years or older to apply

We must have your current last five years of medical records.

Who will Consult me on my Visit?

Read more below or check out the Missouri Federal website DHSS for more information.

Must be 25 years or older to apply

We must have your current last five years of medical records.

Who will Consult me on my Visit?

When can I renew my MMJ license?

The window for submitting a patient or caregiver renewal is 60 days prior to, and no less than 30 days before, the expiration date. Please wait 24 hours following the receipt of a 60 day license renewal notification before submitting the renewal application in the registration system.

-In order to have a paper copy of the Medical Marijuana Card; you will need to:

If you want, we can print and laminate your card for just $10.

-What are the Qualifying Conditions that qualify for Medical Marijuana / Medical Cannabis?

Medical Marijuana is also known as:

Will the patient’s registration status be made publicly available?

No, the law prohibits the DHSS (Missouri Department of Health and Senior Services), as well as Missouri licensed dispensaries, from making personal identifying information public. Therefore, physicians and those employed by dispensaries will be able to verify a patient or caregiver registration.

Will insurance companies cover the cost of a Missouri Medical Marijuana Card / examination?

No, because marijuana is still illegal at the federal level. (as far as we know now.)

What are the qualifying conditions for medical card in Missouri that may be treated with medical cannabis?

State-licensed cannabis physicians are permitted to recommend marijuana for patients with the following nine qualifying conditions and also any additional conditions a doctor recommends: Cancer, Epilepsy, Glaucoma, Intractable migraines unresponsive to other treatment, A chronic medical condition that causes severe, persistent pain or persistent muscle spasms, including but not limited to those associated with multiple sclerosis, seizures, Parkinson’s disease, and Tourette’s syndrome, Debilitating psychiatric disorders, including, but not limited to post-traumatic stress disorder, if diagnosed by a state licensed psychiatrist, Human immunodeficiency virus or acquired immune deficiency syndrome, A chronic medical condition that is normally treated with a prescription medication that could lead to physical or psychological dependence. When a physician determines that medical use of marijuana could be effective in treating that condition and would serve as a safer alternative to the prescription medication, Any terminal illness AND/OR; In the professional judgment of a physician, any other chronic, debilitating or other medical condition, including, but not limited to: hepatitis C, amyotrophic lateral sclerosis, inflammatory bowel disease, Crohn’s disease, Huntington’s disease, autism, neuropathies, sickle cell anemia, agitation of Alzheimer’s disease, cachexia and wasting syndrome.

Will Missouri accept medical cards from other states?

No. At this time, in order to access medical cannabis in Missouri, you must be a patient in the Missouri Medical Marijuana Program.

Are minors are allowed to become legal cannabis patients in Missouri?

No. You must be 25 years or older and a legal resident of Missouri.

Patients will be able to grow cannabis?

Patients will be allowed to grow 6 flowering plants in their home. ( It must be an enclosed, locked facility that is equipped with security devices that permit access only to the patient/caregiver. ) The fee for the grower card is $100.

How much marijuana can a Missouri Medical Marijuana patient possess legally?

Can a pharmacy fill my medical marijuana prescription?

No, you will only be able to obtain medical marijuana at a Missouri-licensed dispensary facility.

Where will I be able to obtain medical marijuana in Missouri?

Medical marijuana will be available from retail dispensaries licensed by DHSS. Once the DHSS has completed its dispensary licensing process, dispensary locations will be made available through their website. We will have a link to that website.

Where can I fax my medical records so that they can be viewed by the physician at the time of my medical marijuana evaluation appointment?

You can fax your records to 636-244-5006 or you can have them emailed to Jodie@mo-nopain.com. DHSS will begin accepting applications for cultivation, manufacturing, and dispensing facilities on Aug. 3, 2019 and we anticipate medical marijuana may be available for purchase as early as January 2020.

When will I receive my Missouri medical marijuana card?

What will take place at my first visit?

What will I need for my appointment?

You will need a photo ID and medical records stating your condition for which you are trying to enter the program.

How much will the Missouri medical marijuana certification cost?

The cost for the Missouri Medical Marijuana Certification is $200 for the initial visit. An extra $50 for the form as well.

Yes. Veterans also receive a discount and pay a reduced initial visit fee of $150. Thank you for your military service. Annual renewal visits cost $150. This price includes assistance with paperwork, medical marijuana education, the doctor’s visit, and help throughout the process.

How much does it cost to register as a medical marijuana patient or caregiver in Missouri?

The actual registration with the DHSS (which is separate from us) will be $50. Approved payment methods are to be determined at a later date once the program develops.

What is a primary medical marijuana caregiver?

Someone who is: Twenty-one (25) years of age or older; Responsible for managing the well-being of a qualified patient. Designated on the primary caregiver application for an identification card or in other written notification to the Department. A medical marijuana caregiver cannot have more than 3 patients.

There is no cannabis at this time, why should I get certified now?

Typically, once dispensaries open there becomes a huge influx of requests for patient registration and doctor visits with significant delays for both. Patients are able to immediately access product when dispensary open.

How long will a Missouri patient’s certification be valid for?

A patient or caregiver registration will be valid from the date of issuance and expire one year later. We will update this as the program develops more.

Do I need to register as a medical cannabis patient in Missouri?

Yes. All medical marijuana patients and their caregivers are required to register with the DHSS. At this time the patient registry is not available. Once available, we will post that link and help patients register in person.

No. You must be a Missouri resident with a Missouri Medical Marijuana card.

Can I have a medical marijuana identification card and own and / or purchase guns?

Any other questions can be answered on DHSS website
https://health.mo.gov/safety/medical-marijuana/faqs-patient.php